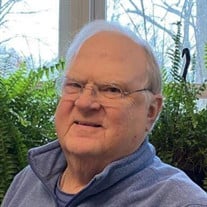 Dennis A. Brandt, 76, passed into God’s arms at 1:08 a.m. on Monday, January 24, 2022 at home in Alton. Born July 6, 1945, in Alton, he was the son of Alfred F. Brandt and Martha Helen (Teakert) Brandt. Dennis married his highschool sweetheart, Jane Fichtel, on July 8, 1967, in Alton and she survives. Dennis graduated from Alton High School in 1963, one of eight valedictorians. He attended Princeton University and graduated from the University of Illinois. After one year of law school, Dennis enlisted in the United States Army and served three years, learning Chinese and serving one year in Tokyo, Japan. After graduating from the University of Illinois School of Law, Dennis worked as both an Assistant State’s Attorney and Public Defender before continuing in the private practice of law in Madison County. Dennis was a life-long Lutheran. While teaching a Bible class on 1st Peter and Jude, he was called into the ministry of the Lutheran Church, Missouri Synod. He moved with his family to St. Louis, Missouri, and received his Master of Divinity from Concordia Seminary in St. Louis. After graduating, Dennis accepted the call to be Pastor at St. Paul Lutheran Church in Thornton, Illinois, a suburb of Chicago. In addition to his wife, Dennis is survived by a daughter and two sons, Cynthia (Leslee) of Portola Valley, California; Alex (Shauna) of St. Peters, Missouri; and Jeff (Elizabeth) of St. Louis; grandsons Quentin and Xavier, of St. Peters, Missouri; and a brother, Robert (Linda) of Alton. He was preceded in death by his parents, daughters Katherine and Laura, and a brother Gerald (Eedie) of Thailand. Visitation will be Sunday, January 30, 2022, from 1-5 p.m. at Elias, Kallal and Schaaf, 2521 Edwards St. in Alton, Illinois 62002 and again at Messiah Lutheran Church, 920 Milton Road in Alton, Illinois from 10-10:30 a.m on Monday, January 31. The funeral service at Messiah begins on Monday at 10:30, and the family requests that masks be worn by all in attendance. Burial will follow at Rose Lawn Memory Gardens in Bethalto, Illinois. All are welcome to share a meal at Messiah Lutheran Church following the burial. The suggested memorial is Concordia Seminary in St. Louis.

The family of Dennis Arnold Brandt created this Life Tributes page to make it easy to share your memories.

Send flowers to the Brandt family.