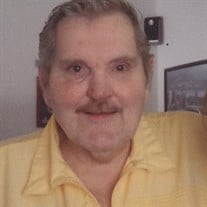 Dateline: Bethalto, IL Delbert Gene Lawrence, age 79, died on April 23, 2022, after a lengthy illness at Alton Memorial Hospital. He was born on April 6, 1943, to Calvin and Leona Lawrence in Alton, IL. Delbert and Gerri Lynn Hamlin were married June 6, 1963. Gerri Lynn blessed him with 4 sons and 1 daughter. She survives after 58 years of marriage. Delbert was preceded in death by his son, John F. Lawrence; his father and mother; a sister, Judith M. Weaver; his first grandson, David J. Lawrence; a daughter -in-law, Lynette R. Lawrence; and many aunts, uncles, cousins, and friends. He is survived by his sons, Calvin E. Lawrence, Matthew A. Lawrence, Herman J. Lawrence; and his daughter, Melissa K. Stortz. Also, surviving are his sisters, Janice M. Hileman and Juanita F. Barnes. Delbert was a grandpa, great grandpa, and uncle to too many children to count. He retired after 40 years from Beall Tool Manufacturing in 2003. He also served in the U. S. Army 578th Ord Co in 1961. Delbert enjoyed watching football, baseball, NASCAR and especially ‘Gunsmoke’ reruns with ‘Juani’ during his final days. He was a kind supporter of local animal shelters as he loved and lost so many furry friends. He’ll be missed by his loyal cats ‘Sweeney’ and ‘Baby Girl’. Delbert will see you all on the Rainbow Bridge one day. Per Delbert’s wishes cremation rites will be accorded by Elias Kallal and Schaaf funeral Home in Bethalto, IL. No services are planned at this time

The family of Delbert Gene Lawrence created this Life Tributes page to make it easy to share your memories.

Send flowers to the Lawrence family.