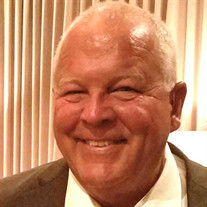 Not sure what to send?

David Ray Crouch, 60, joined his dad in heaven on Father’s Day, June 19, 2022. Born on May 18th, 1962, in Bonne Terre, Missouri, he was one of five children born to Donald and Rosemary (Bequette) Crouch. He graduated from Maryville University in St. Louis and held many positions as an accounting professional. He married the love of his life Theresa (Wille) on April 20th, 2013, and she survives. They enjoyed their time together riding their Harley with friends, fishing, traveling, and spending time with family at poolside. David enjoyed every day and always was looking to make someone’s day brighter. He never went anywhere without a smile or a story to tell. He cherished his time with his wife Theresa and all their children and grandchildren. He enjoyed fishing, hunting, the beach, Cardinal baseball, Florida Gators football, and a good party. David had a love for music, especially The Grateful Dead, Dave Mathews Band and Zac Brown Band. A man of many talents he was an excellent craftsman. He had an infectious laugh and a warm loving smile. He had a great sense of humor. Throughout his life, David had a way of developing a special bond with the people closest to him. Also surviving are his loving mother Rose, a son Andrew (Amber) Crouch, stepchildren Meredith Walter (Eric Decker), Lisa (Ryan) Jacobs, Bryan (Beth) Fuchs, and Jacob (Tabitha) Fuchs. Grandchildren Newo and Zephyr Crouch, Collin and Alyson Walter, Kayli and Bree Jacobs, James Fuchs, and Logan Winn. He has four surviving siblings Donald (Arlene) Crouch of Carthage, Mo, Denney (Joe) Whitener of Bonne Terre, Jane Crouch of St. Louis, and Doug and his companion Melissa Cox of Springfield, Mo. Additionally, he is survived by in laws Arlene Marberry, Richard (Dianne) Wille, Mary (Tom) Droste, Patricia (Scott) Fosko, Brenda (Maury) Cope, and Sharold Wille. He also has many surviving nieces and nephews who he loved dearly. David was preceded in death by his father Donald Crouch and a son Matthew, who died at birth, brother-in-law Thomas Wille, and sister-in-law Barbara (Thomas) Parker. David’s wishes were to be cremated and to have a celebration of life in lieu of traditional funeral services. This will be held at Godfrey KC Hall, Saturday, July 16th from 1 – 5 pm. Memorials will be accepted at the celebration of life to make a donation in David’s name to a cancer charity. Live your life as David lived his . . . kindness doesn’t cost anything, manners are free and everyone should have them.

David Ray Crouch, 60, joined his dad in heaven on Father&#8217;s Day, June 19, 2022. Born on May 18th, 1962, in Bonne Terre, Missouri, he was one of five children born to Donald and Rosemary (Bequette) Crouch. He graduated from Maryville University... View Obituary & Service Information

The family of David Ray Crouch created this Life Tributes page to make it easy to share your memories.