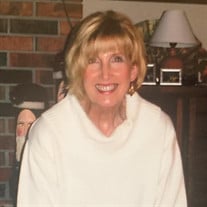 Darlene A. Bohannon, 79, passed away suddenly at 10:07 p.m. Wednesday, July 21, 2021, Penrose-St. Francis Hospital in Colorado Springs, Colorado. She was born July 11, 1942, in Rockbridge, IL, the daughter of Paul and Genevieve “Fay” (Sievers) Tepen. She married Donald R. Bohannon on July 21, 1962, at St. John’s Catholic Church in Carrollton, IL, and he preceded her in death in 2018. Darlene graduated from Greenfield High School in 1960. She attended Miss Hickey’s Business School and worked for United Arts after graduation. She worked many years at Heitz Optical in Alton. Darlene ultimately completed the requirements to be an Optician. Darlene enjoyed fishing, playing Euchre, and going to the Lake of The Ozarks. Halloween was one of her favorite holidays. She enjoyed dressing up as different characters every year for the family hayride. Her greatest joy was spending time with her family and grandchildren. She is survived by her children, Donald Lee (Melisa) Bohannon of Godfrey, Randal “Randy” (Cheri) Bohannon of Chesterfield, IL, Gretchen Joehl of Godfrey, and Brad (Stephanie) Bohannon of O’Fallon, MO; twelve grandchildren, Andy (Jessie) Bohannon, Megan (Kara Remiszewski) Bohannon, Katie (Jeremy) Dunnagan, Emma Bohannon, Nick Bohannon, Lindsey Dover, Maddie Joehl, Nathan Joehl, Anna Joehl, Ryan Joehl, Jack Bohannon, and Ava Bohannon; five great grandchildren, Ellie, Nolan, Lucas, Brynn and Beau; two sisters and their husbands, Eleanor and Rich Alberici, and Mary and Gary Jacobs; and several nieces and nephews. In addition to her husband, Donald; Darlene was preceded in death by her parents. A visitation will be held Friday, August 6, 2021 from 9:30 am until the time of Mass of Christian Burial at 11:00 am at St. Mary Catholic Church in Alton. Inurnment will be at St. Francis Cemetery in Jerseyville. Memorials may be made to St. Mary’s Catholic Church.

The family of Darlene A. Bohannon created this Life Tributes page to make it easy to share your memories.

Send flowers to the Bohannon family.