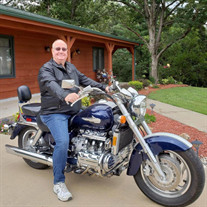 Daniel ‘Kevin’ McCoy, 67, of Dorsey went to his final resting place on Friday, January 14, 2022, surrounded by his loved ones in Alton, IL. Kevin was born on June 22, 1954, to L.J. ‘Mac’ McCoy and Coleen ‘Coke’ (Dodd) McCoy in Alton, IL. He was married on May 6, 1977, at St. Boniface Church in Edwardsville, IL to the love of his life and best friend Janelle (May) McCoy. Kevin is survived by his loving wife of 44 years, Janelle McCoy; his father L.J. McCoy; his son Chad McCoy and wife Natalie Langenfeld-McCoy of Bethalto, IL; his son Ryan McCoy and fiancé Brandi Huber of Dorsey, IL; mother of 2 of his grandchildren Sara McCoy of Bethalto, IL; his dearly beloved grandchildren Luke, Josi, Cash, Nova, Kimmy, and Holden; his brother Jay and wife Jeannie McCoy of Worden, IL; brother Denis and wife Sherry McCoy of Edwardsville, IL; brother David and wife Joann McCoy of Dorsey, IL; sister Cheryl McCoy-Meikamp of Edwardsville, IL; and numerous nieces and nephews who loved him dearly. Kevin was preceded in death by his mother Coleen McCoy and nephew Shawn McCoy. Kevin was a dedicated family man who spent countless hours telling stories about his children and grandchildren whom he was so incredibly proud of. He lived for his family. He found immeasurable enjoyment attending sporting events and practices, award ceremonies, Christmas programs, birthday parties, family dinners, or any other event for his family. He took pride in coaching baseball, wrestling, and softball, for his wife, children, and grandchildren. He loved spending time with his family at his beautiful home, swimming, riding four wheelers, his motorcycle, fishing, or sitting on his scenic deck visiting and telling stories. His favorite places to travel were Branson for music, and Bull Shoals Lake and the Florida Keys for snorkeling. He was a patron of Geno’s 140 club where he and his buddies attempted to solve all the world’s problems. One of his proudest personal accomplishments, beyond his family, was competing in the state series for arm wrestling. He built a successful flooring business, McCoy’s Flooring, which he has passed along to his sons. Kevin was one of a kind. To know him was to love him. He knew no stranger and could talk to anyone. He had the biggest heart, would lend a hand to anyone in need, and was truly someone you could count on. He found genuine excitement and joy in the accomplishments of others and would make any person feel good about themselves. He was a friend that you were lucky to have and a person you would never want as an enemy. He found the positive in every situation and would light up a room with his laughter and smile. Family and friends can pay their respects to the family during a visitation on Tuesday, January 18, 2022, from 4 – 8 pm at Elias, Kallal and Schaaf Funeral Home in Bethalto, IL. Funeral Services will be held Wednesday, January 19, 2022, at 10am at Elias Kallal & Schaaf Funeral home in Bethalto, IL. Memorials may be made in Kevin’s honor to the Bulls Wrestling Club to support a sport that he was truly passionate about Kevin McCoy Fundly . https://fundly.com/donations-in-honor-of-kevin-mccoy?fbclid=IwAR1cYzgWMJo-r6ofhHplr2J3LWqmnNA5Q9Dymqhb9jnG2cqgMdvCr5QJ0hw

The family of Daniel Kevin McCoy created this Life Tributes page to make it easy to share your memories.

Daniel ‘Kevin’ McCoy, 67, of Dorsey went to his final resting...

Send flowers to the McCoy family.