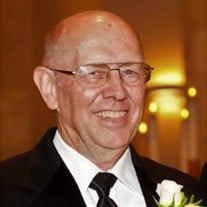 Dateline: Edwardsville Clair A. Hanson, 82, of Edwardsville, passed away on Sunday, March 27, 2022, at 11:00 pm, while at University Care Center in Edwardsville. Clair was born on April 1, 1939, in Pontiac, IL, the son of Agnes A. Hanson. Clair was raised by his maternal grandparents, Anton and Clara Hanson. He married Marla K. Ohm on July 8, 1972, at Eden United Church of Christ in Edwardsville. Clair is a Veteran of the United States Marine Corps, where he received a sharpshooter badge and served aboard the USS Oriskany, an aircraft carrier. After four years of service, he attended Illinois Wesleyan University and the University of Chicago and graduated from both with degrees. Clair worked as a Systems Analyst for Yellow Freight Systems and was a trustee of Bethany Lutheran Church, Overland Park, KS. He enjoyed spending time with his family, shooting trap and skeet, watching baseball and soccer, going for drives, and traveling to all fifty states. He coached the Yellow Freight men’s softball team as well as Kale and Dane’s youth soccer teams. He was a member of Trinity Lutheran Ministries in Edwardsville. Clair was a devoted husband, a loving father and grandfather, and a steadfast follower of Jesus Christ. In addition to his wife, Marla, survivors include his children, Reverend Kale and Dr. (Katie) Hanson of Bethalto and Dane and (Stephanie) Hanson of Thornton, CO; grandchildren Grace, Isaiah, Aubrey, Sophia, Jade, and Ezra; sister-in-law Kara Wright; and nephew Aaron (Christine) Wright. Along with his mother, Agnes, and maternal grandparents, Anton and Clara Hanson, Clair was preceded in death by his father-in-law and mother-in-law, Leonard and Augusta Ohm, and his brother-in-law Martin Wright. Visitation will be on Monday, April 4, 2022, from 4 to 7 pm at Elias, Kallal and Schaaf Funeral Home in Bethalto. Funeral Services will be Tuesday, April 5, 2022, at 10 am, at Trinity Lutheran Church in Edwardsville; Reverend John Shank will officiate. Burial will follow at Lake View Memorial Gardens in Fairview Heights, IL. Memorials may be made to Trinity Lutheran Church and/or the Parkinson’s Association. Online condolences and guest book may be found at www.kallalandschaaf.com

Dateline: Edwardsville Clair A. Hanson, 82, of Edwardsville, passed away on Sunday, March 27, 2022, at 11:00 pm, while at University Care Center in Edwardsville. Clair was born on April 1, 1939, in Pontiac, IL, the son of Agnes A. Hanson. Clair... View Obituary & Service Information

The family of Clair A. Hanson created this Life Tributes page to make it easy to share your memories.

Send flowers to the Hanson family.