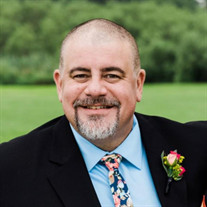 Dateline: Bethalto Christopher L. Brockman, 51, of Bethalto, passed away on Tuesday, October 19, 2021, at his residence. He was born in Owensboro, KY, on January 10, 1970, the son of Joseph E. and Peggy J. (Galloway) Brockman of Elsberry, MO. Christopher married Holly J. Whipple in Las Vegas, NV, on October 23, 1993. Christopher is a Veteran of the United States Marine Corps. He was the maintenance director of Robings Manor Nursing Home in Brighton. He is of the Lutheran faith. He loved to spend time with his kids and dogs. In his free time he loved to watch NASCAR and football, especially the Kansas City Chiefs. Along with his parents, Joseph and Peggy, and his wife, Holly, he is survived by his children, Joshua James Brockman of Bethalto, Sgt. Jacob Christopher (Madison) Brockman of Ft. Worth, TX, and Madelyn Joan-Elizabeth Brockman of Bethalto; a brother, Joseph E. (Brad Waggoner) Brockman, Jr. of Elsberry, MO; his father-in-law, Harold Whipple of Bethalto; brother-in-law, Derek (Carrie) Whipple of Wood River; a niece, Audrey N. Whipple; and a nephew, Carter L. Whipple. Christopher was preceded in death by his mother-in-law, Suzan J. (Powell) Whipple. A visitation will be held on Sunday, October 24, 2021, from 2 pm to 5 pm at Elias, Kallal and Schaaf Funeral Home in Bethalto, where funeral services will also be held on Monday, October 25, 2021, at 11 am. Pastor Kale Hanson will officiate. After services, cremation rites will be accorded. Memorials can be made to the funeral home to help with funeral expenses. Online condolences and guest book may be found at www.eliaskallalandschaaf.com

Dateline: Bethalto Christopher L. Brockman, 51, of Bethalto, passed away on Tuesday, October 19, 2021, at his residence. He was born in Owensboro, KY, on January 10, 1970, the son of Joseph E. and Peggy J. (Galloway) Brockman of Elsberry,... View Obituary & Service Information

The family of Christopher L. Brockman created this Life Tributes page to make it easy to share your memories.

Send flowers to the Brockman family.