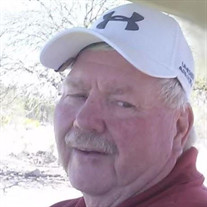 Dateline: St. Jacob Chester “Joe” William Bienkowski, 73, of St. Jacob, passed away on Monday, February 8, 2021 at 11:19pm while surrounded by his immediate family. He was born in St. Louis, MO, on January 6, 1948, the son of William and Pauline (Shepard) Bienkowski. He married Catherine D. McIlvena on January 6, 1973 in Ferguson, MO, at St. Stephen’s Church. Joe worked on the Loading Dock from 1966 to 1980, and a Security Technician from 1980 until retirement in 2019. He was of the Catholic faith. Joe is a Past Master & Member of Beacon Lodge #3 in Hazelwood, a dual member and Past Master of St. Louis Missouri Lodge #1. Joe could also be found at Lodge #45 in Fenton. He enjoyed Lodge events, golfing, traveling, and spending time with his family and friends. Along with his wife, Cathy, Joe is survived by his children, Jessica (Kent) Taylor of Troy, IL, and Amber Bienkowski of St. Jacob, IL; a sister, Judy (Mike) Gill of St. Louis; a brother, Steve (Debbie) Bienkowski of Elkville, IL; and 3 grandchildren Morgan, Ben & Ava, several nieces and nephews, cousins and friends. Joe was preceded in death by his parents; and three brothers, Al, Bobby and Terry. Per his wishes, cremation rites will be accorded, and due to Covid-19 a celebration of his life will be at a later date. Elias, Kallal and Schaaf Funeral Home in Bethalto are entrusted with arrangements. Memorials can be made to Shriner’s Children’s Hospital where he spent the first 2 years of his life. Online condolences and guest book may be found at www.eliaskallalandschaaf.com

The family of Chester "Joe" William Bienkowski created this Life Tributes page to make it easy to share your memories.

Send flowers to the Bienkowski family.