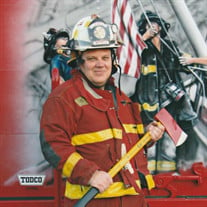 Dateline: Cottage Hills Chester “Chet” T. Schilling, 62, of Cottage Hills, passed away on Sunday, January 16, 2022, at 10:24 am while at OSF HealthCare in Alton. He was born on July 26, 1959, the son of Thomas F. and Doris J. (Kutter) Schilling. He married Linda R. Laurent on November 29, 1980. Along with his parents and wife, Linda, he was preceded in death by a brother, Matthew Schilling. He married Mary M. Becker on June 28, 2008. Chester worked at the Wood River Refinery from 1994 until his retirement from the Cat Cracker Unit at Phillips 66 Wood River Refinery in 2016. He was a volunteer fireman in Litchfield, IL, from 1992 to 2010 and belonged to the Bethalto Fire Department from 1992 to 2010, where he served as fire chief from January 2007 until his retirement in 2010. Chester also belonged to the Wood River Response Team at the refinery from 1992 to 2016. He was a member of Meadowbrook Fire Department from 2016 to 2021. He held an EMT license and paramedic license for several years. Along with his beloved wife, Mary, he is survived by two sons, Michael C. (Angie Bailey) Laurent and Glenn M. (Ashley Roam) Schilling; five grandchildren, Isla and Oliver Schilling, Dawson Laurent, Corey and Brandon Bailey; his stepmother, Connie Schilling of Eldridge, IA; a sister, Debra J. (Gary) Smith of Protem, MO; a brother, Michael (Theresa) Schilling of LA; numerous brothers-in-law, sisters-in-law, nieces, nephews; and his beloved furbabies, Sassy and Munchy. Visitation will be held on Friday, January 21, 2022, from 4 pm to 7 pm at Elias, Kallal and Schaaf Funeral Home in Bethalto. Services will be held on Saturday, January 22, 2022, at 10 am, Burial will follow at Rose Lawn Memory Gardens in Bethalto. Per CDC guidelines, the family asks that you please wear facial mask at the visitation and service. Memorials can be made to the funeral home to help with expenses. Online condolences and guest book may be found at www.eliaskallalandschaaf.com

The family of Chester "Chet" T. Schilling created this Life Tributes page to make it easy to share your memories.

Send flowers to the Schilling family.