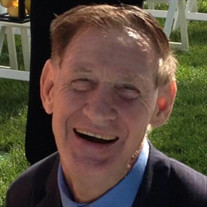 ALTON - "Alton's Can Man" - Charley Moyer, AKA Joey Moyer, died peacefully September 16, 2021, in Wilmington, N.C. Charley was born on May 1, 1945, in Chicago. He was immediately adopted by Mr. and Mrs. William Moyer. William Moyer was an attorney in Chicago. He was born with cerebral palsy and at the age of a year and a half was placed in a home for the physically and mentally disabled in Lincoln, IL. Charley was such a man of determination. He was never able to speak, and his legs were deformed and the only good limb on his body was his left arm and hand, which he used to its fullest potential. He learned to do nearly all daily, normal procedures with this hand. Friends in Alton will remember that Charley picked up cans 365 days a year. Through the hottest and coldest weather, snow, sleet, or rain, the most terrible of conditions, he always picked up his cans. Everyone knew him because of his hard work and friendly smile. Joey (Charley) became one of the most popular people in Alton during his time here, and his legacy will live on around the area for years to come. He was helped by so many citizens and businesses who started saving cans for him. There were also many who remembered him with monetary donations at Christmas. With all of his disabilities (speaking and walking being the main obstacles) he proceeded to live as normal a life as possible. He started collecting cans for an additional income to his only other source….his Social Security. Day after day, year after year, in all kinds of weather, Charley would walk the streets in Upper Alton, in order to retrieve any can he saw. After he left the foster home he had been placed in when he left Lincoln, he rented a very small apartment off Ninth Street. Here he was severely beaten by the man who shared a bathroom with him. This story was released to the new media in Alton and St. Louis and, as a result, Gov. Jim Thompson enacted the “Joey Bill” which made it a felony to attack a handicapped person. Joey sat in the Governor’s chair as the bill was signed (Governor Thompson knelt on the floor to sign it.) In Alton, the people Charley was closest to were Dale and Carol Neudecker and the Neudecker family. Dale and Carol cared for Joey (Charley) for over 30 years and would like to remember and thank all the generous friends who helped him in any way. Dale Neudecker said Charley was an amazing person and was a man of wisdom. "Charley was an exceptional human being of extraordinary perseverance, a soul that was loved by all who knew him and especially by his God," he said. "Charley has reached his goal and received his reward." Another milestone in Charley, AKA Joey's life occurred in 2009 when he was reunited with his brothers. The moment meeting his brothers was one of the largest of his life, something he had always wanted. When Charley could no longer live on his own, his other close friends, Roger and Pat Lowery of Wilmington, North Carolina, moved him to their home and then eventually to a retirement facility. Charley became a checkers master and challenged all comers at his new home. Charley's last few years were happy as he adapted to his new surroundings. Dale Neudecker once said to Charley, after he had accomplished something that amazed Dale: ”Joey, you are so smart and such a hard worker, you could and would have been the president of some company if life had been different." Joey smiled and wrote on the pad of paper he always carried with him….”I am President of a Company – Joey’s Can Company.” A Celebration of Life for Charley (Joey) will be on May 1, 2022 at the Elias, Kallal and Schaaf Funeral Home in Upper Alton. This will begin at 2:00 May 1st is the Date of his 77th birthday. All are welcome to attend and will be streamed by www.riverbender.com. Online condolences and guest book can be found at www.eliaskallalandschaaf.com

ALTON - "Alton's Can Man" - Charley Moyer, AKA Joey Moyer, died peacefully September 16, 2021, in Wilmington, N.C. Charley was born on May 1, 1945, in Chicago. He was immediately adopted by Mr. and Mrs. William Moyer. William Moyer was an attorney... View Obituary & Service Information

The family of Charley Moyer AKA Joey Moyer created this Life Tributes page to make it easy to share your memories.

Send flowers to the Moyer family.