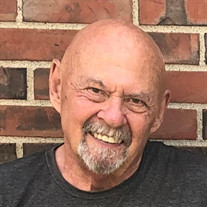 Charles “Randy” Hausmann passed away on June 5th, 2021. Randy was born July 28, 1942, in St. Louis, the only child of Dr. Charles and Pearl Hausmann. He grew up in Alton on the grounds of the Alton State Hospital where his father served as a dentist. Randy attended Alton High School where he ran track and played football, graduating in 1960. Randy attended college at the SIU Alton campus where he majored in art. It was there that he met his future wife, Ralpha Echols. The couple married in 1963 and resided in Alton where they raised two sons, Marc and Ben. Randy worked a variety of jobs from salesman to cook eventually becoming a letter carrier for the US Post Office. The couple retired to Branson, MO where they lived almost 20 years before returning to Alton to be closer to family and friends. After retirement, Randy returned to his true passion, art. He was particularly drawn to subjects specific to Alton, from the Piasa Bird to the bald eagles. Randy taught himself the Japanese print making style of Gyotaku, a traditional method employed by fishermen to record their catch. He also made unique jewelry and wooden sculptures from drift wood found along the banks of the Mississippi River. Randy loved to talk about art and frequented farmers markets and bazaars where he could share his art with the community. In addition to art, Randy was a proud grandfather, an avid gardener, fisherman, animal lover, mushroom hunter, reader, adventurous cook, and a big fan of humor, both good and bad. Randy was the definitive Renaissance man with interests ranging from archeology and history to literature and science. He was a lifelong learner who enthusiastically shared his knowledge with his family, friends, and anyone who would listen. Of particular interest to Randy upon his return to Alton was his desire to move the city away from fossil fuels and toward renewable energy. Randy approached former Mayor Walker with the concept and there is a currently a signed agreement to build a large solar array that will provide clean energy and revenue to the city. This opportunity to give back to his hometown was a genuine source of pride. Randy is survived by his wife Ralpha, his sons Marc and Ben (Michelle O’Malley), and his grandchildren, Liam and Nora with whom he spent many hours perfecting the art of grandparenting. In celebration of his life, visitation will be held 5 PM – 7 PM, Thursday, June 10, 2021, at Elias, Kallal and Schaaf Funeral Home in Godfrey. A Mass of Christian Burial will be held 10 AM, Friday, June 11, 2021, at St. Mary’s Catholic Church in Alton. Father Paul Nguyen, OMV will officiate. Burial will follow at St. Patrick’s Cemetery in Alton. In lieu of flowers please consider donating to one of Randy’s favorite charities: The American Society for the Prevention of Cruelty to Animals or the Southern Poverty and Law Center.

Charles &#8220;Randy&#8221; Hausmann passed away on June 5th, 2021. Randy was born July 28, 1942, in St. Louis, the only child of Dr. Charles and Pearl Hausmann. He grew up in Alton on the grounds of the Alton State Hospital where his father... View Obituary & Service Information

The family of Charles "Randy" Hausmann created this Life Tributes page to make it easy to share your memories.

Send flowers to the Hausmann family.