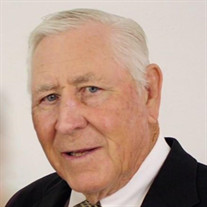 Date Line: Holiday Shores Charles “Chuck” Paschedag, 89, of Edwardsville, IL, passed away, surrounded by family, on Monday, April 19, 2021 at 4:29 p.m. He was born in Granite City, IL, the son of William and Ora (Goad) Paschedag, and one of eight children blessed to that marriage. Chuck graduated from Granite City High School in 1949, where he excelled in academics, as well as athletics, in the sports of baseball, track and wrestling. He reached the State Championship match in wrestling. After graduation, he entered the School of Metallurgy and Mines at Rolla, Missouri (now part of The University of Missouri), where he earned a degree in Metallurgical Engineering. He was also a starter on the intercollegiate golf, baseball, football, and track teams, earning All-Conference honors in the javelin. Wrestling at that time was an intramural sport only. He was undefeated for four years. As graduation neared, the Army ROTC Class was assigned tours in either Korea or Europe. Lieutenant Charles Paschedag served in reconstructing Northern Europe, and extending runways for the new jets on the scene. His men affectionately called him “The Pepsi-Cola Kid” due to his devotion to soft drinks only. Charles married Amelia Ann Stallings on June 24, 1961, in Alton, IL, at the First Christian Church on Washington Avenue. Chuck and Amy had the honor of being the first couple married in the new church. In their work lives, he served as the Chief Combustion Engineer for Granite City Steel, (cur-rently U.S. Steel), while she taught Home Economics / Family Living at Bethalto’s Civic Memorial High School. Chuck was the last survivor among his siblings, all of whom were very close all their lives. His children all survive him: Dennis and Carol (Nordstrom) Paschedag; James and Keetra (Plumb) Paschedag; Cathy (Paschedag) David; Steve and Diane (Paschedag) Wilson; and Thomas and Sherri (Lada) Dustin. Be-sides being a devoted husband and father, and an excellent example to his 5 children, 19 grandchildren, and 24 great-grand-children, Chuck cherished his roles as both a lifelong teacher of the Bible, and as a beloved Elder of his church family for 50 years. When he was no longer physically able to serve in that role, he was honored with the title of Elder Emeritus, First Christian Church. A memorial service will be held with Visitation at 10:00 a.m., and Celebration of Life at 11:00 a.m., on Saturday, April 24, 2021, at The First Christian Church, Alton, IL. Minister Jim Johnston will be presid-ing. Memorials may be directed to The First Christian Church, 760 Washington Avenue, Alton, IL, 62002. Online condolences and guest book may be found at www.eliaskallalandschaaf.com

The family of Charles Paschedag created this Life Tributes page to make it easy to share your memories.

Send flowers to the Paschedag family.