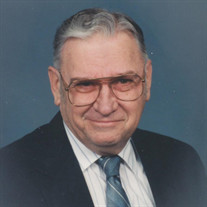 Dateline: Bethalto Charles F. McKean, Sr., 91, of Bethalto, formerly of Worden and Rosewood Heights, passed away on Wednesday, January 5, 2022, at 2:45 am, at Alton Memorial Hospital under the care of BJC Hospice. He was born in Tomalco, IL, on September 23, 1930, the son of Willard and Pearl (Finke) McKean. They lived in Wood River from 1937 to 1947. In 1947 the family moved to Bethalto. Charles married the love of his life, Irene H. Mehrer in Wood River on April 9, 1950. She preceded him in death on July 24, 2010. Charles worked at Owens Illinois Glass as an inspector, and he met his wife there. He also worked at Granite City Steel from 1950 to 1960, and various labor jobs at the Chevy Plant. Charles started working on leaving the labor force and started working at McDonnell Douglas as a computer operator. He took classes at night at Lewis and Clark Community College. He received his associates degree in programming in May of 1974. He worked at Laclede Steel as a programmer for many years and then Germania Savings Loan, Home Federal in St. Louis. He loved Sunday Suppers with his family, watching Cardinal Baseball, fishing, and golfing with friends. He was an active member of Bethel General Baptist Church of Bethalto. Survivors include his children, Charles (Gayle) McKean of Staunton, James (Loretta) McKean of Alton, and Donna (David) Badman of Rosewood Heights; grandchildren, Joel Nimmo, Clay Nimmo, Jeffrey Nimmo, and Natalie Gonzalez; great-grandchildren, Patrick Nimmo, Caden Nimmo, Josiah Nimmo, Ren Nimmo, Reed Nimmo, Jessamine Nimmo, and Roland Gonzalez. Visitation will be held on Saturday, January 8, 2022, from 9:30 am until time of service at 11 am at Elias, Kallal and Schaaf Funeral Home in Bethalto. Burial will follow at Rose Lawn Memory Gardens in Bethalto. Memorials can be made to the Alzheimer’s Association. Online condolences and guest book may be found at www.eliaskallalandschaaf.com

Dateline: Bethalto Charles F. McKean, Sr., 91, of Bethalto, formerly of Worden and Rosewood Heights, passed away on Wednesday, January 5, 2022, at 2:45 am, at Alton Memorial Hospital under the care of BJC Hospice. He was born in Tomalco, IL,... View Obituary & Service Information

The family of Charles F. McKean Sr. created this Life Tributes page to make it easy to share your memories.

Send flowers to the McKean family.