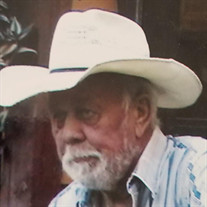 Charles “Chuck” Smith, 83, passed away at 10:04 am Tuesday January 19, 2021 at home. He was born on September 18, 1937 in Alton, IL the son of Noble & Bertha (Powell) Smith. Chuck married Teressa (Fitch) on October 30, 1992 and she preceded him in death on November 25, 2018. In addition to his wife and parents, he was also preceded in death by the mother of his children, Charlotte (Kinney) Smith and a granddaughter, Mindi Smith. He owned and operated Chuck’s Masonry for over 40 years; proud of the brickwork, homes and buildings built. His primary passions were his family; Chuck was devoted to loving his family and it was known. Chuck was also an avid waterfowl hunter and a member of Migratory Waterfowl Hunters. So if you see a flock of geese fly overhead…think of Chuck because even though he could not hear most of your conversation, he knew when a flock of geese were flying over. He was passionate about his horses and bought property so family and friends had places to trail ride; with one of his favorite memories including his vacation to Colorado for a group trail ride. Chuck is survived by two sons and a daughter-in-law, Ronnie (Bobbie) Smith of Hardin and Jimmy Smith of Rushville; two daughters and sons-in-law, Diane (Jeff) Dugger of Jerseyville, and Pene (Brett) Hanson of Jerseyville; six grandchildren, Bryan (Amanda) Smith of Jerseyville, Adam (Dawn) Smith, Candace (Billy) Isringhausen, Cole (Jennifer) Hanson, Wyatt Hanson of Montana, and Brittany Dugger of Godfrey; twelve grandchildren; and one sister, Margie Hamilton of Jerseyville. In accordance with his wishes, cremation rites will be accorded. Memorials may be made to: Illinois Valley of Economic Development for Meals on Wheels. Elias, Kallal and Schaaf Funeral Home in Godfrey have been entrusted with arrangements.

The family of Charles "Chuck" N Smith created this Life Tributes page to make it easy to share your memories.

Send flowers to the Smith family.