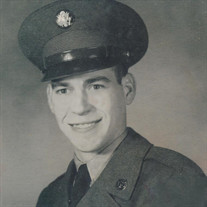 Dateline: Wood River Charles “Charlie” M. Antrobus, Sr, 89, of Wood River, passed away on Wednesday, January 27, 2021 at 11:50 am at his residence. He was born on October 25, 1931 in East Alton, the son of Louis H. and Blanche E.E. (Craft) Antrobus. He married Ruth Bryant and she preceded him in death. He later married Sherry Huffstutler in 1960 in Alton and together they had four children before their marriage ended. They remained friends until her death in 2014. During the Korean Conflict, he served in the United States Army, 82nd Airborne as a paratrooper. Charlie worked for G.M. as a line worker for 36 ½ years before his retirement in 1994. He is a past member of the East Alton American Legion Post 794 and the Wood River VFW. He enjoyed baseball games, watching western movies, going for walks, and spending time with his grandchildren. Charlie is survived by his children, Jennifer L. Floyed of Wood River, Charles M. Antrobus, Jr. of Wood River, and Scott W. Antrobus of Godfrey; six grandchildren, Eric Antrobus, Jocelyn Floyed, Amanda Antrobus, Nicole Floyed, Eli Antrobus, and Jameson Floyed; two great-grandchildren, Serenity and Jaxxon; three sisters; two brothers; and several nieces and nephews. Along with his parents and two wives, Ruth and Sherry, he was preceded in death by an infant son; an infant daughter, Neva Ellen Antrobus; and two brothers. Visitation will be on Sunday, January 31, 2021 from 2 to 4 pm at Elias, Kallal and Schaaf Funeral Home in Bethalto. A private graveside service will be held at a later date for family at Wanda Cemetery in South Roxana. Military rites will be performed by Alton VFW, Post 1308. Memorials can be made to Wounded Warriors. Online condolences and guest book may be found at www.eliaskallalandschaaf.com

The family of Charles "Charlie" M. Antrobus Sr. created this Life Tributes page to make it easy to share your memories.

Send flowers to the Antrobus family.