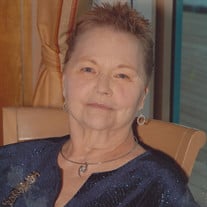 Carol J. Williams, 79 of Alton, Il passed away on Monday, February 22, 2021 at 6:40 am at Riverside Rehab and Healthcare. She was born on May 17, 1941, in Alton, IL the daughter of Norman and June O’Donnell Landon. Carol, Beloved mother to Shirley, Roxanne and Lester Williams II, cherished wife of Lester Williams Sr for over 55 years, he passed on Feb 26, 2018. She was also preceded in death by her parents, June and Norman Landon. Surviving Shirley (Scott) Schneider, Roxanne (Jim) Neumann, Lester (Jackie) Williams II, Grandchildren James Neumann III, Jessica Neumann, Jenna Neumann, Aaron Schneider, Mark Schneider. Four great grandchildren Waylon Neumann, Dallas Schneider, Evan Hull, Dakota Schneider. She was employed at Central Hardware before it’s closing then went to work at National Foods for many years before taking an early retirement. Carol was a colorful person. She made paintings, wall art, and decorated for her home after visiting Australia…. She was known as the Alton Halloween Float Lady for many years - making floats for the Family Float Entry- winning many prizes over the years. Carol was awarded a plaque recognizing her commitment to the Alton Halloween Parade. She was instrumental at building a Float for the Alton Memorial Day Parade for it’s 100th Anniversary. Carol, mother and grandmother, she loved all of her family. Two of her children’s family’s lived next door at times which gave her plenty of visits with grandchildren. She enjoyed camping trips, canoeing trips, vacations with her husband of 55 years. She would arrange mini vacation trips as well for her kids and spouses for weekend getaway’s. For more than 7 years Carol and Lester enjoyed the company and care of TJ Nappier, who kept them active walking and discussing the daily routines. Visitation will be held on Friday, February 26, 2021 from 4:00 pm until 7:00 pm at Elias Kallal and Schaaf Funeral Home in Alton. Funeral Services will be held on Saturday, February 27, 2021 at 11:00 am at the Funeral Home. Burial will follow at Valley View Cemetery in Edwardsville, IL. Memorials may be made to Hope Haven of Cass County.

The family of Carol J. Williams created this Life Tributes page to make it easy to share your memories.

Send flowers to the Williams family.