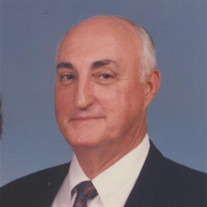 Dateline: Alton Carl William Mayer, age 90, of Alton, passed away at 11:28 Monday, December 7, 2020 at home with his family by his side. He was born on March 3, 1930 in Alton, the son of the late Carl G. & Ruby (Holliday) Mayer. Carl married Afton Louise Crissip on November 13, 1954 at the Evangelical United Church of Christ in Alton, IL. She preceded him in death on January 18, 2016. He was a lifetime member of the Evangelical United Church of Christ in Alton and worked at Laclede Steel Company for 35 years. He served his country in the United States Marine Corp and was a member of Alton VFW Post 1308. He was a member of the Franklin Masonic Lodge 25 AF & AM., the Alton Wood River Sportsman’s Club where he loved to shoot trap and enjoyed hunting and fishing. He is survived by three children and their spouses; Mark and Deb Mayer of Bethalto, Carla and Charles Naylor Jr. of Alton and Judith Mayer of Florida, four grandchildren and their spouses; Jennifer and Ryan Spurgeon, of Bethalto, Jason and Lindsey Mayer of Columbia, IL, Steven and Lindsey Naylor of Alton and Michael Naylor of Alton, eight great grandchildren; Evan, Adelynn, Edith, Ryleigh, Emerson and Grady, Nolan, and one expectant great grandchild in April, one sister and brother-in-law, Mildred and Jim Chapman of Wood River, IL, and numerous nieces and nephews. Private viewing will be held Thursday December 10, 2020 at Elias, Kallal and Schaaf Funeral Home in Alton. Private Graveside services will be held at Rose Lawn Memory Gardens Cemetery with Rev. Jerry MeCaskey officiating. Alton VFW Post 1308 will conduct military rites. Memorials may be made to the BJC Hospice of Alton and the Benevolent Fund at Evangelical United Church of Christ.

The family of Carl William Mayer created this Life Tributes page to make it easy to share your memories.

Send flowers to the Mayer family.