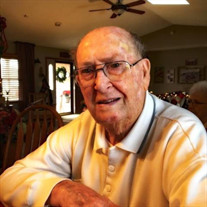 Dateline: Bethalto Bradford “Bud” A. Wiseman, 95, of Bethalto, passed away on Thursday, December 3, 2020 at 2:16 am while under the care of BJC Hospice at Alton Memorial Hospital. He was born on December 23, 1924 in Bollinger County, MO, the son of Roy and Myrtle (Fee) Wiseman. Bud married Yvonne “Bonnie” A. Edelen in Alton on June 8, 1946. Bud was a foreman at Owens Illinois in Alton for 39 years before retirement in 1981. He was an avid fisherman, and enjoyed watching St. Louis Cardinal baseball games, tinkering, remodeling homes, as he even built two in his lifetime. He also enjoyed having fun with life and just spending time with his family and his donut shop buddies. Along with his wife, Bonnie, of Bethalto, Bud is survived by his children, Linda (Joe) Rich of Bethalto, Wayne (Debbie) Wiseman of Caseyville, and David (Tera) Wiseman of Shipman; a brother, Lester “Eldon” (Lucille) Wiseman of Barnhart, MO; a sister-in-law, Delores “Dee” Wiseman of AR; seven grandchildren, Jon Metheny, JoEllyn (Chris) Klepacki, Reagan (Aaron) Fiorino, Roy (Karen Hall) Wiseman, Brian (Nadia) Wiseman, Sawyer Wiseman, and Sheridan Wiseman; eight great-grandchildren. Bud was preceded in death by his parents; an infant daughter, Janet Wiseman; a grandson, Michael Metheny; a sister, Almeda Puckett; and two brothers, Truman Odell Wiseman and Junior Wiseman. Services will be private. Burial will be at Rose Lawn Memory Gardens in Bethalto. Elias, Kallal and Schaaf Funeral Home in Bethalto is in charge of arrangements. Memorials can be made to a charity of one’s choice. Online condolences and guest book may be found at www.eliaskallalandschaaf.com

The family of Bradford "Bud" A. Wiseman created this Life Tributes page to make it easy to share your memories.

Send flowers to the Wiseman family.