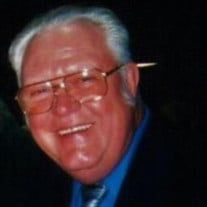 The Lord called his faithful servant Bob E. Wall home on Friday December 11th 2020 at the age of 83 from Alton Memorial Hospital. Bob was born on February 3, 1937 to Ranel & Gladys Helen (Young) Wall in West Frankfort, IL. Bob worked to help support his family and was in the Forestry service until he moved to Alton in 1955. He started his career at Laclede Steel Company and served as a maintenance foreman and a millwright for 41 and half years. After retirement Bob helped start a “Laclede Retiree’s Breakfast” for Laclede retirees. This breakfast grew to over 300 people and met twice a year. Bob started working for Elias, Kallal and Schaaf as a greeter and driver. He was blessed to be able to assist people when needed. Bob was one of the most patient and hard-working men you will ever meet. August 18th, 1975, Bob married the love of his life, Sandy (Burris) Lankford in Godfrey, Illinois. They enjoyed traveling from coast to coast, especially Alaska. Bob was a member of Calvary Baptist Church in Alton and became head usher and the early morning service greeter. He was a gifted man and was willing to help with many projects that were needed at church. His church and church family were a blessing to him. A member of Alton-Wood River Sportsman Club, he enjoyed hunting and fishing. He had wonderful woodworking skills and made many porch gliders for family and friends. Many of his wood working items were used at church. Bob loved being with his children, grandkids, and his great-grandkids – showing them how to do things. He was a great and giving man. Best Grandpa Ever. He is survived by his wife, Sandy, his daughters, Peggy Hartman of Alton, Il, Louretta Dawkins of Charlotte, NC, Vicky Lankford of St. Louis County, Jeanette Cooper of Gilbertsville, KY, Cherie and Gary Moorhead of Jerseyville, IL Nelda Mattes of Smithland, KY, Jeff Hartman; sixteen grandchildren, Christina (Scott) Reno, Hannah (Michael) Armbruster, Rachel Hartman, Danielle Murphy, Victoria Ourth, Meghan Moorhead, Andrew Moorhead, Jeb Barnes, Brooke Barnes, Starr Telford, Jeffrey Wooley, Juette Barrow, LaNette Biggs, Will Cooper, Hatch Williams, Cole Williams, great-grandchildren, Zane Reno, Jet Reno, Lukas Edge, Ella Edge, Josh Barnes, Nadia Telford, Amelia Telford, Jack Telford, Michael Barrow, Drew Barrow, Trevor Mosley, Alexis Biggs, Aiden Williams, Hatlee Williams Bella Williams, Addi Williams, Cevin Williams, great, great-granddaughter Scarlette Barnes, a sister, Patsy Coffman of Shipman, IL. He was preceded in death by his parents; a daughter, Evelyn Hollowell; and two sisters, Peggy Weaver of New Mexico, and Margie Hyden of Bethalto. Due to the COVID-19, social distancing, occupancy, and mask wearing guidelines will be followed as mandated by the CDC. Visitation will be December 15, 2020 from 1-3 with a Services to follow at Calvary Baptist Church in Alton, Rev. Andre’ Dobson officiating. Cremation rites will follow, and private inurnment will be held at Upper Alton Cemetery. Memorials may be made to Calvary Baptist Church.

The family of Bob E. Wall created this Life Tributes page to make it easy to share your memories.

Send flowers to the Wall family.