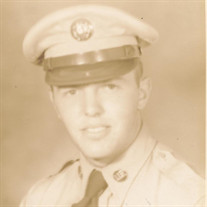 Dateline: East Alton Billy “Bill” Ray Dillon, 87, of East Alton, passed away peacefully on Sunday, January 31, 2021 at his residence. He was born on May 30, 1933 in Switchback, WV, the son of William C. and Nannie O. (Scarberry) Dillon. He married Ethel P. Strader on January 21, 1956 in Hartford, IL. She preceded him in death on February 23, 2020. Bill was a Veteran of the United States Army, where he was a corporal and served from June of 1953 to June of 1955 in Europe during the Korean Conflict. He worked in the chemical milling department at McDonnell Douglas for 36 years before retirement in 1992. Bill was in the Machinist Union Local #837 out of Hazelwood, MO. He enjoyed racing stock cars and motorcycles when he was young. He also loved spending time with his family and friends, especially his grandchildren. He is survived by his children, Rodger Dillon of East Alton and Sandy (Dave) DeWall of East Alton and his grandchildren, Kara DeWall (Anthony) and Alex (Hanna) DeWall. Along with his wife, Ethel, and parents, Bill was preceded in death by three sisters, Lucille Brooks, Phyllis Mason, and Dorothy Covey; and three brothers, Roland Dillon, Arnold Dillon, and Robert Dillon. Visitation will be held on Monday, February 8, 2021 from 10 am until time of service at 11 am, at Elias, Kallal and Schaaf Funeral Home in Bethalto. Rev. Calvin Reynolds will officiate. Burial will follow at Jefferson Barracks National Cemetery in St. Louis. Memorials can be made to BackStoppers and/or The Bethalto Presbyterian Church. Online condolences and guest book may be found at www.eliaskallalandschaaf.com

The family of Billy "Bill" Ray Dillon created this Life Tributes page to make it easy to share your memories.

Send flowers to the Dillon family.