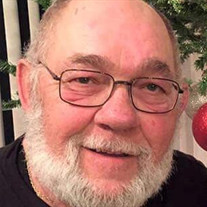 Dateline: Bethalto Bertis “Bert” E. Griffin, 76, of Bethalto, passed away on Monday, October 11, 2021, at Alton Memorial Hospital. Bert was born on August 16, 1945, in Alton, the son of Hershal B. and Rita L. (Beiermann) Griffin. He married Cindy L. (nee Kilmer) Rulo in Meadowbrook on June 15, 1996. He is a Veteran of the United States Army and served in the Vietnam War. After he retired from the maintenance department of Lindenwood University in June of 2008; he worked for the Bethalto school district driving a bus for 10 years, until 2018. Bert was a member of the American Legion Bethalto Post 214. He enjoyed camping, working in his garage, and racing. He was a jack of all trades and a handy man. Bert loved spending time with his family and friends, especially his grandchildren. Along with his wife, Cindy, he is survived by his children, Bert Eugene Griffin, Jr, Rob (Susan) Griffin, Jodie (Dan) Sparrow, John (Angie) Griffin, Jamey Griffin, Heather (Scott) Kruchowski, Tim (Katie) Griffin, Jason (Casey) Griffin, and Melissa Ramirez; his siblings, Debbie “Sis” Griffin, John (Mary) Griffin, Kathie (Mike) Brooks, and Melann (Chris) Ray; fifteen grandchildren; two great-grandchildren; and several nieces, nephews, cousins and friends. Bert was preceded in death by his parents; and a brother, Ronnie Griffin. A celebration of life will be held on Thursday, October 14, 2021, from 3 to 7 pm at the Bethalto American Legion. A service will be held at 5 pm, with Pastor Terry McKenzie officiating. Per his wishes, cremation rites will be accorded. Elias, Kallal and Schaaf Funeral Home in Bethalto is in charge of arrangements. Memorials may be made to The American Cancer Society. Online condolences and guest book may be found at www.eliaskallalandschaaf.com

The family of Bertis "Bert" E. Griffin created this Life Tributes page to make it easy to share your memories.

Send flowers to the Griffin family.