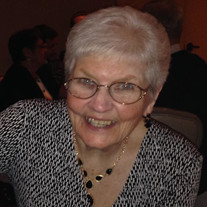 Dateline: Alton Barbara L. Walkington, 84, of Alton passed away on Tuesday, April 13, 2021 at 7:00 am at Robings Manor in Brighton, IL. She was born on December 13, 1936, the daughter of William and Leola (Wahl) Kohler. On November 19, 1954 Barbara married Stanley E. Walkington in Alton, IL. He preceded her in death on October 21, 2016. Barbara was a member of The Evangelical United Church of Christ in Godfrey and the Alton Wood River Sportsman’s Club. Out of High School she started working at Bell Telephone Company as a phone operator. She later worked at Kroger Deli in Godfrey until they closed. Barbara then worked for Dr. Sun as a receptionist for SIHF Healthcare. She enjoyed painting, was a wonderful seamstress, a good neighbor and took pride in her home. She is survived by four children, Linda Fergurson (Michael) of Alton, IL, Carrie Welshofer (John) of Plano, TX, Dane Walkington (Paula) of Dorsey, IL, and Dawn Boyter of Doyline, LA; a sister-in-law, Judith Kohler; 13 grandchildren; 27 great grandchildren; and a special cousin, Candice Montero. In addition to her parents and husband, Stanley; Barbara was preceded in death by a son-in-law, Travis Boyter; two sisters, Anna Patterson and Doris Kohler; and two brothers, William and Robert Kohler. A Memorial visitation will be held on Friday, April 16, 2021 from 10:30 am until the time of service at 12:30 pm at Elias Kallal and Schaaf Funeral Home in Alton. Burial will take place at Valhalla Memorial Park. Memorials may be given to The Evangelical United Church of Christ in Godfrey or 5A’s Animal Shelter.

The family of Barbara L. Walkington created this Life Tributes page to make it easy to share your memories.

Send flowers to the Walkington family.