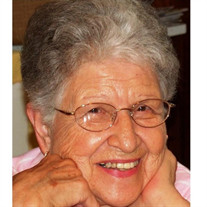 Anna “Gerry” Wittman, 98, flew away with the angels on February 6, 2021. Ann was born on July 24, 1922, the seventh child of the late Domiano “Dominic” and Anna (Azzarello) Campagna at home in Alton, IL. as her grandmother watched and prayed. Her mother said that she had to carry Ann on a pillow because Ann was so tiny. She didn’t grow much in the following 98 years either. After graduating from Alton High School, Ann went to work for Western Cartridge Company on Oct. 10, 1940. In September 1944, she endured the loss of her fiancé when his aircraft went down over Peleliu, Philippines. She continued to work at Western until October 10, 1950 – 10 years to the day. She married Walter “Bud” Wittman at St. Ambrose Catholic Church on October 14, 1950. He preceded her in death on Nov. 8, 2010. Ann was a homemaker, learning to be a farmer’s wife from her beloved mother-in-law, Kunigunda Wittman and cousin-in-law Armilda Wittman. She also held various part-time jobs later in life. She enjoyed bowling in afternoon leagues and being a pink lady hospital volunteer. Prior to Covid-19 restrictions, she loved playing Skip-Bo and dominoes with her friends and neighbors at Cedarhurst of Godfrey. She and Bud were among the original Alton Mall walkers weekday mornings followed by coffee-time at Hardees. They continued to go daily until 2009. They loved Friday dinners at the former Moose Lodge in Jerseyville and dancing every Saturday at the Alton VFW. Ann continued to reside on the family farm in Godfrey until January, 2015 when she moved to her independent-living apartment at Cedarhurst of Godfrey. On her 97th birthday, she was a passenger on her youngest son’s (Doug) motorcycle for a joyride from Jerseyville to Cedarhurst of Godfrey. She loved her family’s surprise car parade on her 98th birthday. She felt like a queen for the day and wondered how they’d top that for her 100th birthday. Unfortunately, her maker had different plans for her. Surviving are her three children, Susan (Steve) Stricker, Olathe, KS, Tom Wittman, Jerseyville, IL, and Doug (Wendi) Wittman, Godfrey, IL., 6 grandchildren, 9 great-grandchildren, and dozens of cherished nieces and nephews who have shown Ann infinite love over the years. She was the last family member of her generation. In addition to her husband and parents, she was preceded in death by one grandson, her brothers and sisters-in-law, Tony (Cora) Campagna, Joe (Ginny) Campagna, August (Athlone) Campagna, and Vince Campagna, her sisters and brothers-in-law, Jo (Joe) Clyde, Toni (Bert) Darr, a toddler brother, Joseph Campagna, infant sister, Mary Campagna, her brothers-in-law, Joseph (Ann) Wittman, Raymond (Veatrice) Wittman, Carl (Mayme) Wittman, Leo (Shirley) Wittman, Bill (Jackie) Wittman, Norbert (Marty) Wittman and her sister-in-law, Catherine “Sis” (Ollie) Gray. Ann’s family wants to thank Cedarhurst of Godfrey and Jerseyville Manor for the exemplary care they provided during her time of need. A PRIVATE Mass of Christian Burial for Ann’s immediate family and relatives will be held at St. Ambrose and will be streamed on St. Ambrose’s Facebook page on February 12 at 10 a.m. Covid-19 restrictions will be observed, and masks will be required. Burial will immediately follow at St. Joseph’s Cemetery. Donations in her memory can be made to Shriner’s Hospital c/o Elias, Kallal & Schaaf Funeral Home, 1313 W Delmar, Godfrey, IL 62035. Envelopes will be available at the Church for family members.

The family of Anna "Gerry" Wittman created this Life Tributes page to make it easy to share your memories.

Anna “Gerry” Wittman, 98, flew away with the angels on February...

Send flowers to the Wittman family.