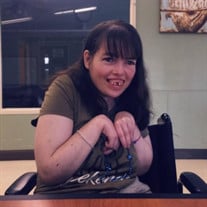 Dateline: Alton, IL Allison E. Gaarder, 41 of Alton, IL passed away on Thursday, December 17, 2020 at 4:00 pm at Beverly Farm Foundation in Godfrey, IL. She was born on July 2, 1979 in Wheat Ridge, CO; to Gilbert “Bill” and Carol Lynn (Peckinpaugh) Gaarder. Alli was a special girl. She will always be in our hearts. She had an infectious smile and had a way of helping people to understand the small things in life. She loved pink pigs and would often give people an animal name as a term of endearment. Alli enjoyed life, and had lived many places including, Colorado, Canada, California, Brazil, and finally, Alton, IL She is survived by her siblings, Derek Gaarder ( Stephanie Foos) of Windsor, CO and Erin Green (Mike) of Saudi Arabia; nephews, Broggan, Anderson, and Jentzen Gaarder, Tennyson and Atlas Green, and Oliver Foos; a niece, Malia Foos; grandmother, Donna Peckinpaugh; aunts and uncles, Pat Gaarder, Steve Gaarder (Mary), Sue Gaarder (Jean Whisnant), David Gaarder (Barbara O’Sullivan), Nancy Gaarder (Bob Reicke), John Gaarder (Jeannette); Robert Peckinpaugh (Nancy), and James Peckinpaugh (Rosalie); along with several cousins. She was preceded in death by her parents, maternal grandparents and paternal grandparents. Cremation rites will be accorded by Elias Kallal and Schaaf funeral Home in Godfrey, IL A memorial service will be held at a later date. Memorials may be made to the Beverly Farm Foundation

The family of Allison E. Gaarder created this Life Tributes page to make it easy to share your memories.

Send flowers to the Gaarder family.