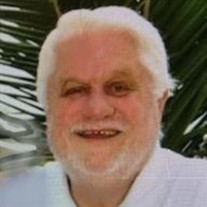 Dateline: Alton Albert “Cleve” Journey passed away in his sleep April 17, 2021. He was born February 14, 1938 in Eldred, IL, the son of Paul and Mildred (Tate) Journey. He married Judith Simpson on Dec. 26, 1959 and she survives. Affectionately known to his friends and family as Cleve, he was a teacher at Cottage Hills grade school, East Jr. High, Central Jr. High in Alton, IL and eventually a math teacher at Alton High School where he retired after 37 years. After retirement, he went on to teach math in different capacities for local schools and colleges for 16 years. Cleve was an avid fisherman and spent most of the summer camping with his spouse Judy and friends and family. He will be dearly missed by his family and friends. He was a member of 1st Baptist Church in Bethalto where he cooked the suppers on Wednesday Evenings. He also acted as a referee for the Upward program. Cleve was best known for portraying Santa Claus at Alton High School and at Rock Springs Parks Christmas Wonderland. After his retirement, he portrayed Father Christmas at the Spirit Walk in Bethalto. In addition to his wife, Judith; he is survived by two sons and their wives, Allan D. and Suzette Journey of Bardstown, KY, and Bruce W. and Cathi Journey of Meadowbrook, IL; his grandchildren, Amanda and Ryan Cress and Jeremy Journey, children of Allan; great-grandchildren, Jodi, Kal and Lucas Cress, children of Amanda and Ryan Cress of Jeffersontown, KY; grandchildren Jennifer, Kyle, Lindsay, and Tiffany, children of Bruce; and Andrew Matthews, son of Cathi Journey; great-grandchildren, Hunter Turner, Tanner Edgar, Chelsea Smith and Evie Hurtte; and his adopted grandchildren Jessica McIntire (nee Winchester), Megan Winchester, and Kylie Winchester; and his siblings, Karen and Phil Reason of Forsyth, IL, and Lawrence and Randi Journey of Benton, IL. “Love you to pieces Grandpa Cleve.” He is preceded in death by his parents; and two sisters, Mary Jones and Eleanore Damm. Visitation will be held Wednesday, April 21, 2021 from 4:00 pm until the time of service at 6:00 pm at Elias, Kallal and Schaaf Funeral Home in Bethalto. Per his wishes, he will be cremated and buried at Rose Lawn Memory Gardens at a later date. In lieu of flowers, memorials may be made to 1st Baptist Church of Bethalto. Online condolences and guest book may be found at www.eliaskallalandschaaf.com

The family of Albert "Cleve" Journey created this Life Tributes page to make it easy to share your memories.

Albert “Cleve” Journey passed away in his sleep...

Send flowers to the Journey family.